Come and learn all about the heroes of the tale, how to control them and the secrets to turn them into walking tanks. But beware the dreaded Dragon! 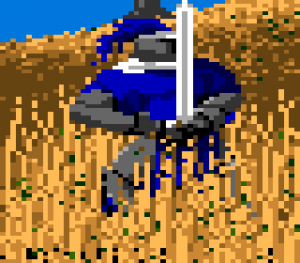 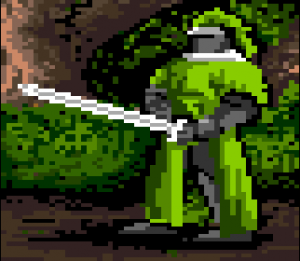 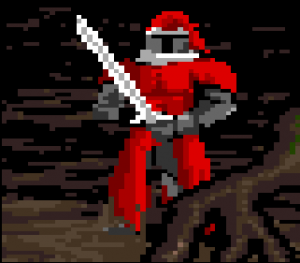 To select your knight simply highlight your favourite and press the fire button. This will prompt you to type in your own name if you wish. Once done press return, or the fire button.

These rogue knights serve a religious sect called ‘The Dark Hall of Purity’ that believes the druids are blasphemous and must be stopped. They wander the four territories searching for followers of the druids who are trying to acquire the Moonstones, in order to prevent them from completing their quests. The Black Knights have an uncanny ability to grow more skilled in combat and strength during an encounter.

A rare CU Amiga demo disk provided us with a glimpse of what the true black knights were intended to be… true warriors, and bastard hard to best. Here’s a video of one of them giving me a hiding. Wonder why they were toned down in the final game? 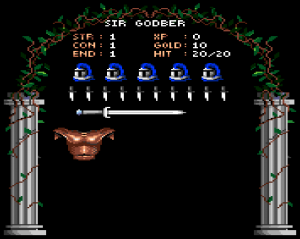 You begin your quest with this gear. It’s not much, but it’s a start…

Up to four human players can play Moonstone together, although they will be set against one another and will have to fight to the death at one point or another.  If less than four players are selected, the other knights are computer-controlled dreaded Black Knights, whose eventual aim is to track you don’t and make sure that you don’t complete your quest!

The knight’s abilities describe what you can do physically in the game in terms of numbers.

Strength is a measure of how strong you are in combat. The more strength a knight has, the more damage you will inflict upon your opponents.

Constitution is a measure of how much physical punishment a knight can withstand before you collapse. The higher your constitution, the more damage you can take before losing a battle.

Endurance is a measure of how much physical activity a knight may endure before you become exhausted and must rest. The higher your endurance, the further you can move in a day.

A knight’s abilities can be temporarily raised by various normal and magical items. They can also be raised permanently by a magical gift from either the wizard Math, or by the Mystic.

You can also permanently raise your abilities through gaining experience in combat.

Experience is earned by successfully conquering a lair.

In a 3 or 4 player game, for each point of experience earned, either strength, endurance, or constitution can be raised by one point (at the knight’s choice). In a two player game 2 experience points are required and in a one player game, 3 points.

Life points are a measure of how close to death a knight has become, due to injuries sustained during combat. Each knight starts the game with 5 life points and every time you lose a combat, a life point is lost. When you are reduced to 0 life points, you are dead and and for you the quest is over. There are many ways to raise your life points…

You can pay a healer in the cities. A potion of healing will raise life points.

If you go to your home village and you have less than 3 life points, then your village druids will heal you for free.

The last possible way of raising life points is to offer a magic item to Danu at Stonehenge.

Life points are divided up into hit points. If during combat your current hit points are reduced to 0, then you will lose the combat and a life point. Hit points can be healed at the healer or through healing potions. Knights also heal naturally each day that is passed.

The Phases of the Moon The phases of the moon are the key to the success of your quest. Once the cycle of the moon matches your moonstone you must reach Stonehenge to fulfil your quest before the cycle changes. Only then will you successfully complete the quest. As a knight with such a Moonstone in your possession, you can be sure that the other knights will stop at nothing to destroy you.

Throughout the game, the phases of the moon will change constantly. This affects the strength of some of the creatures and is key to the powers contained in the Moonstone. After each knight has had three turns (each knight gets one turn per day), the moon advances one phase. The order of the phases are as follows:

Your position on the map is shown by an icon. Move the joystick in the direction that you wish to move. When you come in contact with another icon, that icon will start to glow. At this point you may choose to encounter that icon by pressing the fire button.

Forests, mountains and swamps slow your movement down considerably and increase your chance of encountering wandering monsters outside of their lairs.

During your turn you have these keyboard options.

E – Ends your turn early so you may rest and recuperate your hit points.

Other Players and Black Knights

You may challenge other knights to battle by moving over their respective icon. To the victor goes the spoils, and the loser edges ever closer to death and failure in the quest. The victor may take either all the losers gold pieces or one object. If, however, the winner takes the last life point from the loser, then the winner may claim all of the loser’s gold, objects, and magic objects.

Throw Knife: This throws one of the knight’s throwing daggers.

Overhead Chop: This attack does twice the damage of a swing or thrust, but is easily avoided because of the time it takes to swing the sword.

Upward Thrust: Good for hitting opponents jumping over the knight. Thrust Backwards: This is a thrusting attack directed backwards.

Swing: This attack sweeps the area in front of the knight.

Block: This defence allows you to block the swing attack.

Special Defensive: Invokes a special defence move which varies from monster to monster.

Lunge: This attack has the longest range apart from daggers.

The controls in Moonstone are incredibly intuitive and satisfying to orchestrate…

When a knight faces the other way, the controls flip along the horizontal (i.e. 1 and 3 switch, etc.).

If your knight begins to flicker during a battle, the game is warning you that you have 10 hit points or less left.

Many of the monsters have special attack moves which render you helpless unless you use your special defence.

Dragons are huge, flying, fire breathing lizards. They are cruel and greedy by nature and patrol the four territories looking for the next unwary traveller to slay and plunder. Dragons are exceedingly dangerous in combat and nigh-on impossible to slay. If a dragon defeats a knight, he will take all his gold pieces and one magic object (unless he reduces that knight to 0 lives; then he will take everything). However, whoever manages to slay a dragon will take over its accumulated horde of wealth and magic items.

After a titanic scrap the Red Dragon lies in pool of blood at our hero’s feet. Now there’s a sight Moonstone players don’t see every day.