My ‘Making of Moonstone’ feature as published in Edge Magazine; click on any of the below images to enlarge. 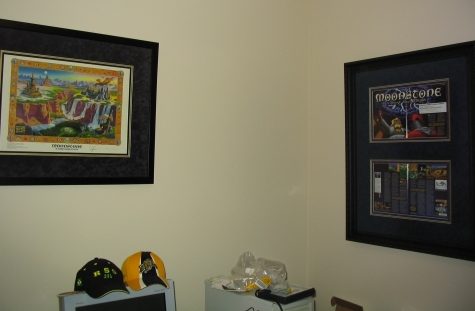 My Edge feature framed and hanging in Todd Prescott’s study

Posted below is my review of Moonstone that’s been published on Gamefaqs, The Amiga Games Database, Lemon Amiga, Home of the Underdogs and on Mobygames (in an abridged version).

A sacred time is upon the people, a time that descends only once every thousand years. As the Druids will be only too happy to tell you, this is the season of the Moonstones! But to earn such a great prize, first you must prove yourself. Dare you enter the Valley of the Gods to vanquish the fearsome guardian, claim the ultimate prize and earn your place amongst the heavens?

If another game has the ability to set your pulse racing quite as much as the premise behind this one, then I’d really like to hear about it.

The gameworld of Moonstone essentially consists of two sections. Turn-based movement, influenced by the differing phases of the moon, takes place on a world map where up to four player knights are represented. The land is divided into four neighbouring territories – plains, wastelands, forests and wetlands, each being home to one of the quest knights. Any non-human players become hostile computer-controlled knights emanating from the Dark Hall of Purity, an order that exists with the sole intention of cutting our hero(es) into lots of tiny little pieces.

Moonstone is, at heart, a single screen hack’n’slash fighter interspersed with a number of light but welcome RPG elements. After they have chosen their quest knight and begun to traverse the world map, players soon find themselves confronted by a wide range of hostile adversaries, each of which require differing tactics to dispose of. And now the real fun begins…

From the behemoth Baloks of the Northern Wastes to the terrifying Mudmen of the Wetlands (the discordant shriek from the organ as they rise from the mud to drag unwary knights to their doom in the putrid depths still causes me heart palpitations even today!), these creatures will test your fighting mettle to the limits. Slaughter them, raid their lairs and claim their spoils. Find the four keys to the Valley; kill any opposing knights, the dragon and the guardian along the way before claiming your Moonstone and, with it, immortality. Simple!

Gameplay on the battlefield is intuitive and combat, without exception, flows beautifully. A range of satisfyingly meaty thrusts and parries lie at your disposal, naturally varying in power and speed of execution. Meanwhile, the ability to throw daggers constitutes attacking from afar. Collision detection is spot on, are as such players will rarely feel cheated when they die, save for one or two “no escape” situations when facing multiple enemies. Just don’t mention the near-invincible red dragon, the scourge of many a Moonstone gamer over the years…

As touched upon previously, the rich game world of Moonstone complements its arcade action with a number of RPG elements. Along with a varying selection of spoils, victories on the battlefield also bring much-needed experience points that can then be invested into increasing a knight’s endurance, constitution or strength levels. But beware: as your quest knight gains in ability, his monstrous opponents attack in ever higher numbers! (This kinda defeats the whole object of becoming tougher methinks, but when combat is this much fun who cares? More bad guys to butcher I say!)

Between bouts of butchery, quest knights can take time out to journey to the settlements of Highwood and Waterdeep. There they can engage in a little gambling, trade items and battle equipment with merchants, buy wards and charms from the High Temple or pay a visit to either a healer or clairvoyant Mythral the Mystic. Opportunities also exist to visit Math the Wizard for guidance or even seek assistance from the Gods themselves at Stonehenge, but I always preferred to get on with the business of killing!

For those nostalgic gamers amongst you, who have become jaded with today’s generic textures and instead hanker for the days of painstakingly hand-drawn, sumptuous 2D visuals, Moonstone will certainly not disappoint. For a title released in 1991, stunning near-cartoon quality introductory and ending sequences of the game frame the exciting tale perfectly. The world map is similarly rich and well animated, with a host of diverse locales to visit between the numerous battle grounds.

Combat graphics are mouth-watering; well-animated and bursting with life and character. Yet, after a few minutes of playing, Moonstone’s true legacy in the gaming world becomes only too apparent: gore. Mindscape’s effort was a true pioneer in this respect, with the battlefield resembling a charnel-house when you had finishing hacking and slashing your way through seemingly unending legions of cannon-fodder. Limbs fly and the blood flows in rivers, and – in a great touch – corpses do not disappear when slain like in some contemporary titles. In Moonstone they just keep piling up, and the effect is truly something to behold. As testament to its sickness Moonstone was actually banned in a number of countries!

Also undoubtedly worth a mention is computer game music veteran Richard Joseph’s sparsely utilised but nevertheless stunning score which further adds to Moonstone’s wonderfully evocative atmosphere of prevailing doom. From the jolly “Olde-England” ballad that accompanies your wretched efforts at gambling in squalid taverns to the Arabesque Eastern twang when you pay a visit to Mythral the Mystic, the standard was everything we’ve come to expect from Mr. Joseph. Not to mention the dread evoking dirge that set the mood of the game, and its use to such stunning effect during the loading screens before each tense encounter. Sampled sound effects are of a similarly high standard – every grunt, roar and screech is devastatingly realistic, and for you true sadists within the gaming community even the sound of blood pumping from severed limbs and arteries is included!

As with all games, classic or otherwise, this slightly unpolished gem does contain its fair share of flaws. Perhaps a few more months development time could have ironed out the frequent crashes in the Amiga version, or at the very least Mindscape could have implemented a save or password feature to save pissing gamers off and the breaking of many a joystick in frustration! More enemies, more locations, more equipment and a larger, scrolling, world map would have been similarly welcome – the quest will be completed far too quickly for most players’ likings. The game does have the option of up to four players, but what about human knights temporarily joining forces to simultaneously attack lairs and share the spoils? This would have added a further element of strategy to proceedings. More disappointment is to be found in the under-utilisation of the moon phases, which could have been an amazing innovation if implemented correctly. Yet, despite these nitpickings, Moonstone still shone and the potential was there (and still is!) for a killer sequel. Still, perhaps one day I’ll get my wish… *sigh*

For further information on this wonderful title, please pay a visit to my Moonstone Tavern at www.moonstonetavern.co.uk. Therein lies a complete dissection of the game, as well as a history of the quest, an extensive bestiary, battle tactics, ROMs, movies and wallpapers for download and tons and tons of gory screenshots that will no doubt bring the memories flooding back. Remember, the Gods await their new champion…